INFP-INFP relationships? Being in one, I have a lot to say about this!

First of all, this kind of partnership isn’t easy to establish.

Well, it’s not that INFPs are hard to deal with. Rather, these Dreamers are affectionate and committed people. But because they’re so guarded and cautious in relationships, they won’t easily admit their feelings to anyone, in fear of being vulnerable.

Truly, finding another INFP is difficult. Getting to know and starting a relationship with them is even tougher.

But let’s imagine that you get past the long hide-and-seek game. Or maybe, you’re already a thread away in entering in one. What would your INFP-INFP relationship look like?

In this post, I’ll share the bad and, more importantly, the best parts of being in this relationship.

Let’s tackle the INFP and INFP compatibility, the strengths, struggles, and my personal experiences with this partnership.

Do INFPs and INFPs get along?

Frienship-wise, INFP and INFP do get along. A lot.

The INFP is sensitive, and the other INFP dislikes offending people. Because both are respectful and perceptive to feelings, they come off as calm and non-judgmental, making the other INFP feel safe and free in expressing their true ideals.

What’s more, as both introverted Feelers (Fi) and extraverted Intuitives (Ne), their ideas intuitively connect and end up with childlike fun as they find each others’ thoughts witty and weird. The connection is filled with warm and funny banters.

This partnership can have emotional, intellectual, and intuitive compatibility overall.

However, despite these comforting traits, the reality is, these relationship dynamics are complex and multi-faceted.

Once you dive deep into your INFP’s life, you start to see the sides that both never show to the world — the creativity, their bursting list of dreams, depth, backstories, and the painful struggles that they may still carry up to the day you met.

Believe me, once you enter into an INFP-INFP relationship, you will find discoveries after discoveries. You will tell yourself, “Oh, I never thought you’re like this,” or “I never imagined you actually do that.”

But depending on how you handle them, these aspects can either make or break the relationship.

Going back to the question, do INFP and INFP get along?

With proper communication and compromise, yes, INFP and INFP can get along well in a relationship. They share many similarities in values and priorities and create a supportive and loving environment for growth and self-discovery.

But remember, there are no relationships without struggles. When two INFPs are immature, this can cause a lot of friction.

To learn more, let’s start off with the strengths of the INFP INFP relationship.

The Strengths of INFP-INFP Relationship

1. INFP couples think so much alike.

From completing each others’ sentences to fancying the same hobbies… INFPs just think too much alike. I say, TOO MUCH!

Being in an INFP-INFP relationship feels like you have a telepathic connection with your partner, seriously!

It’s mindblowing how intentions and emotions are easily understood with very few words.

People say “opposites attract,” but being with someone who shares similar cognitive functions isn’t an entirely bad thing.

You get another person who thinks the same way as you, feels the same emotion as you, and understands what motivates you — all because they perceive the world the same way.

They dislike the same people, love the same circle, enjoy the same songs, and are united with the same goals. They’re in love with the same artists and plan to go on trips that involve nature and relaxed ventures.

They both dance when their favorite music comes up, and quiet down when both exhausted.

2. When making decisions, they always put their partner first.

INFPs are loyal and committed in relationships.

The “Didn’t you think it’s gonna hurt me?” arguments come rare, because, in the first place, your INFP likely knows what actions will emotionally hurt you.

They put themselves into your shoes and live by the golden rule:

“Do not do to others what you don’t want to be done to you.”

If it will emotionally hurt themself, what more if they did it to their partners? So no, INFPs would rather walk away from those actions than have their morals questioned by their INFP partners.

But if ever they unintentionally commit a mistake, and understood where they went wrong, they are quick to apologize, too.

3. Both are romantic — surprises here and there!

INFPs are sweet and romantic and always consider making their INFP partners happy.

That said, expect that the relationship will be filled with unique experiences simply because INFPs never run out of new ways to surprise their partner — poems, artwork, or anything you won’t expect.

They love giving customized or thoughtful presents. They consider each other’s likes and dislikes, take note of the one thing their partner mentioned, make a surprise off of that, and execute the efforts.

My INFP partner and I are currently in a long-distance relationship. He’s overseas.

Even when he’s far, he takes his time planning surprises, and his ways are amusing me everytime. Before, I thought I’m good at detecting them, but turns out, he’s even better at keeping it a secret. 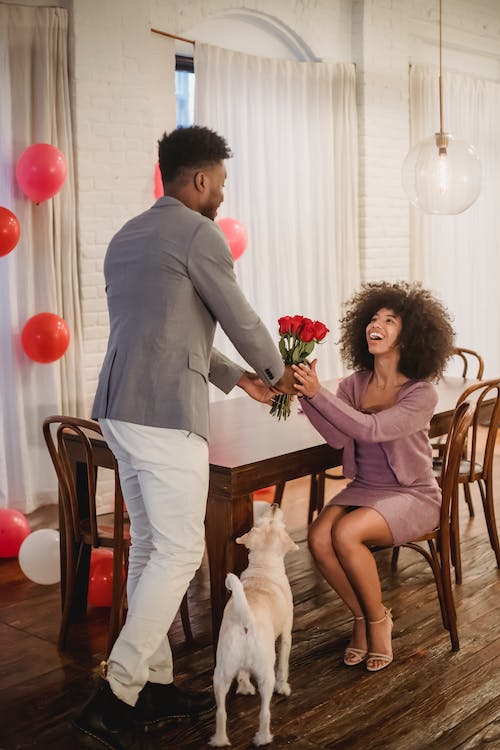 He would ask our common friend to deliver a cake and balloons on my birthday, gifted me a portrait that he drew, and gave me a ring with a special message only we can understand.

Meanwhile, one recent effort I made was editing our picture into 2D graphics, printed it as a sticker, and wrote a letter.

If you’re an INFP, have you done such thoughtful surprises to make your partner happy?

4. The relationship is filled with idealistic plans.

INFP and INFP is a relationship filled with daydreams and plans — setting goal after goal.

The INFP crafts their own world; fortunately, their INFP partners know the right things to say that heightens the excitement even more. They become each others’ inspiration and polisher for the “vision.”

There will be plans that are put into action, others that are still pending, and plans that they spent hours imagining but “didn’t make the cut.”

The dreams piles up, like building a fantasy world within the realistic realm.

5. Laughs are so genuine because you intuitively connect.

Say, you unintentionally spoke a line that sounded like the cartoon character you both made fun of in the past.

The INFP partner remembers the funny memory, and you realize what he realized. Then boom! Both laugh hard because the memory is stuck in their minds.

It’s so weird how our minds connect like that. But it’s so rewarding.

From experience, when we talk, we often end up laughing at a random thought until our sides hurt.

It’s like having our own little comedy show people don’t easily relate to. It’s so precious!

It’s not hard for two INFPs to land on similar hobbies. Both are open-minded, curious, and love anything mind-boggling, creative, and imaginative.

They are best at catching on to their partner’s interest.

Come to think of it, all my partner’s recommendations — series, games, and movies — were something I binge-watched/played.

Recently, my partner urged me to play an RPG game called Ark. Even when I don’t find interest in any 3D games, I ended up loving the world-building aspect of it.

Such similarity indeed leads INFP-INFP partners to a sense of shared identity, purpose, and unity.

The Struggles of INFP-INFP Relationship

1. When their morals clash, it’s mind-whacking.

When an INFP couple is immature, they catch themselves dismissing their partner’s point of view and putting their morals over the other. This is a common scene when two Fi-dominants clash.

INFP-INFP relationships have to deal with lots of arguments regarding their values, especially in the beginning.

The hard part is, even when both completely understand each other, they will still be stubborn about how they think the situation should go.

When this happens, they either throw the harshest words or disappear from their partners’ life.

As conflict-averse people, they usually withdraw, especially when the argument takes too long and isn’t reaching a solution.

They both become indifferent, giving no cares — which we all know can sever the relationship big-time, if not given a resolution.

2. INFPs influence each other’s emotions — and end up withdrawing from the world. 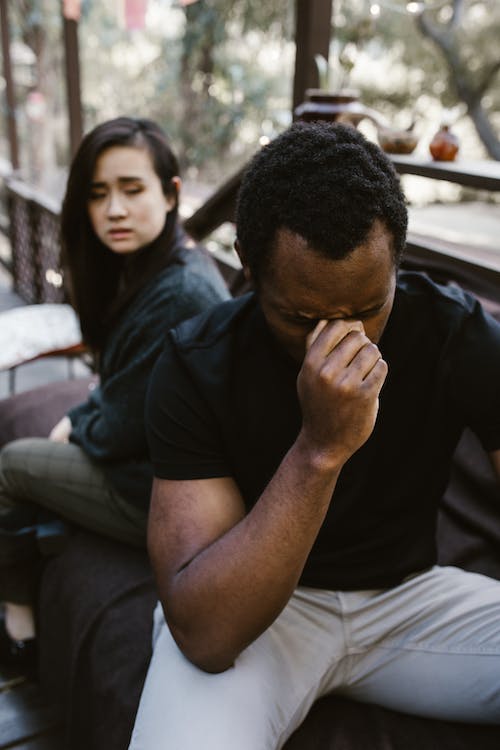 As mentioned above, INFPs, as empaths, will immediately know if something is off about their partners. But these negative emotions can easily drag the other INFP down.

At the end, it’s like a tug of war of emotions. Who will win: the depressed or the optimistic INFP?

For me, the worst fights that can bring INFP-INFP relationships to an end is when one INFP thinks they’re not making their partner happy.

They take it personally, and would rather withdraw and set their partners free, rather than change or work on the situation.

For example, after consecutive arguments, the immature INFP would jump to self-deprecating thoughts like: “I know. You deserve better than this.” “I’m not treating you right, I’m really sorry.” “I’m such a loser.”

They start to believe this in their hearts, moving an inch closer to withdrawing from the world. When in truth, they’re doing their best more than the majority of people out there.

Such self-deprecating thoughts don’t work with another INFP because they’re more likely to disappear, too.

If no one tries to find a way out and fix this, then it’d be a long and lonely road in this relationship.

You may also like: How Can INFP Stop Being Hard On Themselves (3 Tough Advice)

3. They overthink others’ emotions.

One of the exhausting parts of being in an INFP-INFP relationship is over-reading emotions.

Here’s one sample of my text conversation with my INFP partner:

There are times when INFPs just mean what they say. But if one INFP (or both) is an overthinker, a simple topic can lead to hours of back-and-forth discussion — with no resolution.

It becomes infuriating because the overthinker tries to put colors, words, and emotions on the other INFP.

Although they could be right sometimes, unfortunately, there are times that they’re not.

This is why both INFPs need to work on being straightforward. When you’re offended, say it. Mean what you say.

4. Can be clingy, yet also need alone time.

Both can be clingy, and both would like alone time, too.

When their social batteries are not on the same page, and they have no set boundaries, it will be a disaster.

An INFP who doesn’t get the attention feels ignored and unloved.

Meanwhile, the INFP who can’t get their alone time will eventually explode out of anger and frustration.

If you ever have this problem, the best way is to communicate, have verbal cues about being drained or not, and lastly, compromise.

In conclusion, INFP-INFP relationships can be a wonderful and fulfilling experience for both partners. They share a deep understanding of each other’s inner emotions and values. They can often connect on a deeper level than with other personality types.

However, like all relationships, it is not without challenges. Both partners may struggle with communication and assertiveness and may find it difficult to make decisions or set boundaries. INFPs in a relationship need to work on these areas to ensure a healthy and happy partnership.

Overall, INFP, when mature, can be highly compatible with each other. They inspire, are sensitive, and cater to each other’s idealistic minds.

That’s it. I hope you learned something from this post. Thanks for reading! 🙂